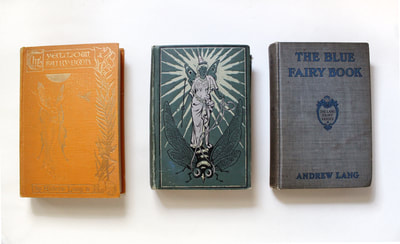 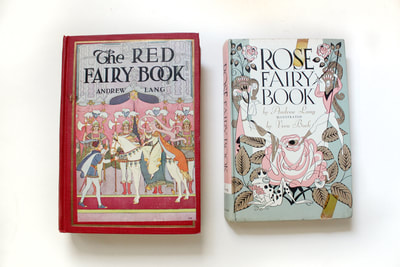 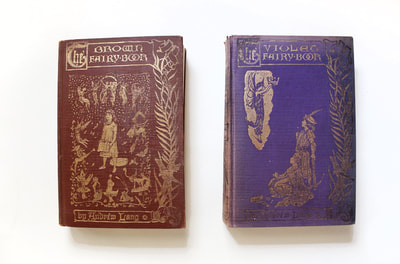 Above, The Lang Fairy Books
various editions from the early 20th century through the 1960s.

Whatever the cover & binding, our universal stories are inside these books, in all their wild, enchanted, brutal, non-sequitur beauty. 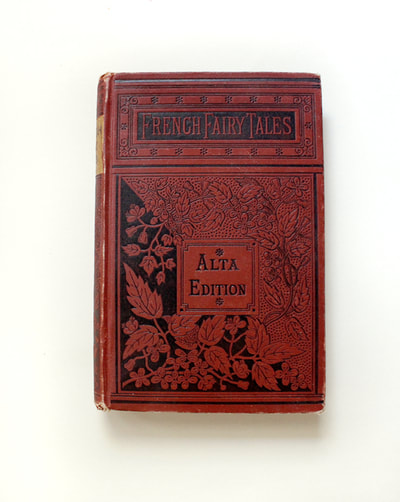 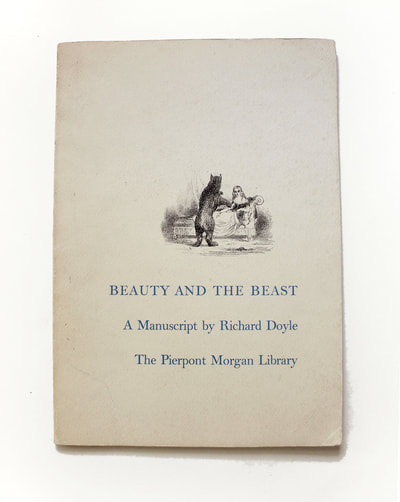 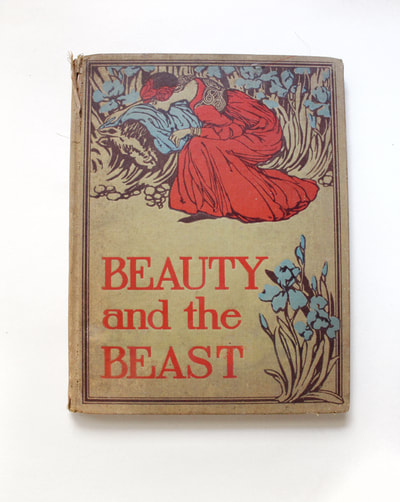 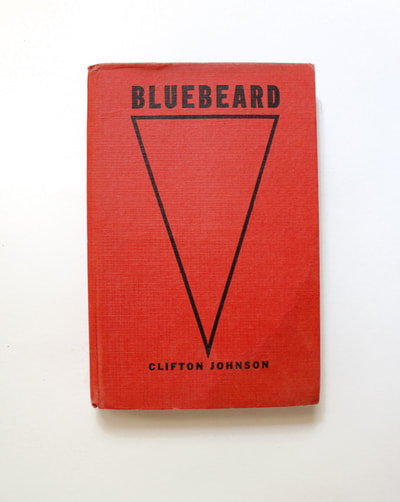 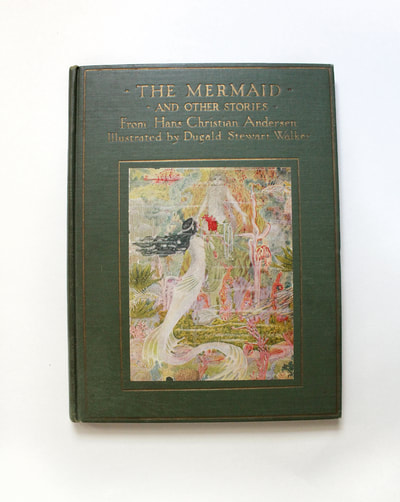 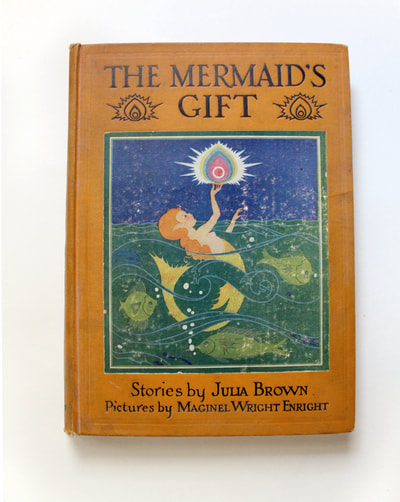 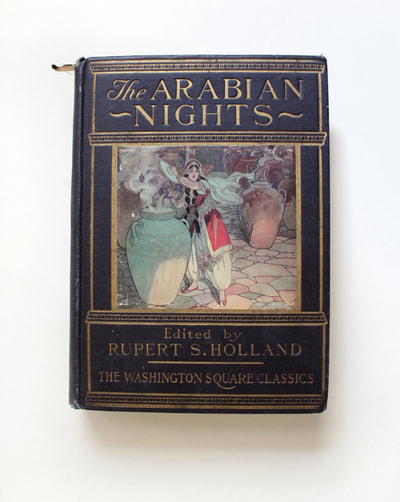 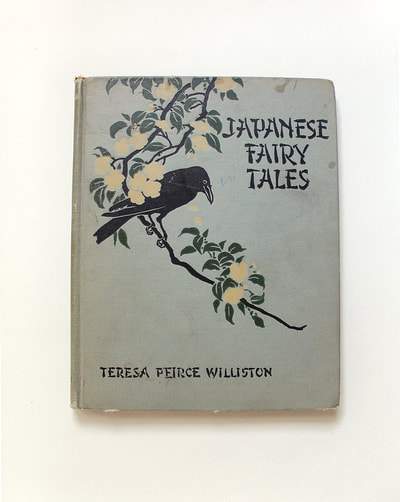 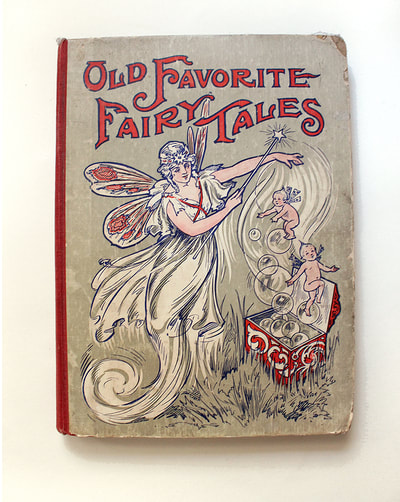 Above, various favorite covers
from the early 20th century through the 1960s.
Over time, I've read each of these (some only in part.) The shared icons, characters & themes in stories from all over the world are fascinating : conjurers, magic objects and fearsome monsters, gentle-hearted maidens, brave wayfarers, witches and creatures that are not what they seem. The places they diverge (usually via some cultural fixation unique to the area of the story's birth) are equally interesting. A few of my books are 20th century fairy tales, ones written during the Victorian/early 20th century vogue for new fairy tales. But of them all, the Lang books have grown to be my favorites for the original (uniformly magnificent) illustrations by H. J. Ford, but also for their sheer heft, their rambling tables of contents...and the way they include the most famous stories in the world with obscure, incredibly strange ones. 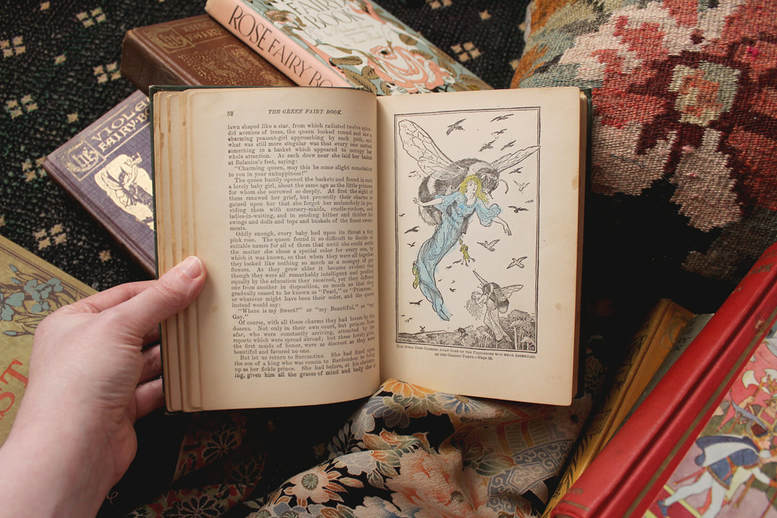 A crayon-embellished (by some former child-owner)  illustration from The Green Fairy Book
sampling from the Yellow Fairy Book:
The Six Swans
The Golden Crab
The Seven-headed Serpent
The Invisible Prince
Alphege, or The Green Monkey
The Grateful Beasts
The Witch and her Servants
The Glass Mountain
The Flower Queen's Daughter
The Boy and the Wolves, or The Broken Promise
The Hazelnut Child
Thumbelina
A Story about A Darning-needle

Don't those titles make your heart ache? They make mine ache, and they tell a tiny story (which, in classic fairy tale fashion, may be shamelessly unlike the one suggested by the title.)
Finally, the source of my own story, the bones I built my tale of brave girls and dark woods upon: 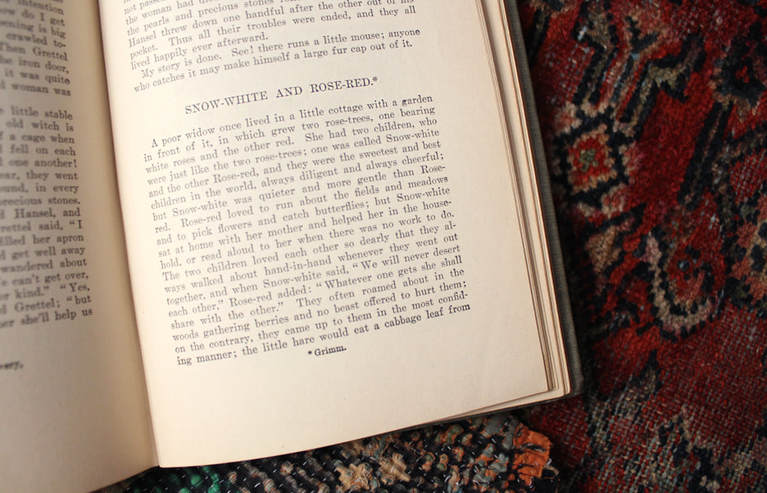 May we all live to a great age, in peace and happiness ever after.